So how do A.A. members “run” A.A.? How do the groups make their voices heard on overall A.A. policies? In order for AA to run itself, we have to have a system for finding out how A.A. as a whole feels about its world affairs, and how it wants to operate. 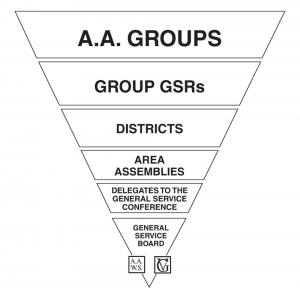 Each A.A. group has it’s say in worldwide A.A. affairs through its general service representative (GSR). A GSR is a member of a group and elected by the group members. If a group does not have a GSR it is isolated from the rest of the Fellowship and does not participate in the group conscience of A.A. as a whole.

Every group in an area can send its GSR to the area assembly. The DCMs are there, too, making up the area committee—a sort of steering committee for the assembly. Each group sends its own ideas or problems to the assembly and other groups can share their experience and help. From the assembly, each GSR can take back to the group the experience of other groups.

Every area elects a delegate to go to the General Service Conference in New York each April. The Conference represents a vast pool of A.A. experience gathered for decades from A.A.s all over the world. Every A.A. group can share its experience with other groups through its area delegate to the Conference.

The 93 elected area delegates make up over two-thirds of the Conference, but there are others at the annual Conference session, too: the 21 trustees of A.A.’s General Service Board; the directors of A.A. World Services, Inc. (the legal entity responsible for the business of the General Service Office) and the A.A. staff members at GSO; and the directors of The A.A. Grapevine, Inc., as well as the A.A. staff of the magazine.

Every A.A. group has a voice at the Conference if it has an active GSR!

At the Conference, various committees address specific aspects of A.A.’s interaction with the rest of the world: through literature, public media and information, correctional and treatment facilities, professionals (such as doctors, lawyers, and clergy) who come in contact with alcoholics, local A.A. offices (known as a central office or intergroup), etc. Not surprisingly, many of these same activities are conducted on a smaller scale to more effectively and appropriately respond to the needs within a community—thus the standing committees of areas and districts. These standing committees discuss, plan, and carry out their related service activities, relying on the direction and participation of the A.A. groups they serve.

The GSR, “May Be the Most Important Job in A.A.”. The general service representative has the job of linking his or her group with A.A. as a whole. The GSR represents the voice of the group conscience, reporting the group’s thoughts to the district committee member and to the delegate, who passes them on to the Conference. This communication is a two-way street, making the GSR responsible for bringing back to the group Conference Actions that affect AA unity, health, and growth. Only when a GSR keeps the group informed, and communicates the group conscience, can the Conference truly act for A.A. as a whole.

For more information about linking your group to A.A. as a whole, see here.

"We must carry the message, else we ourselves can wither and those who haven't been given the truth may die" (from A.A.'s Legacy of Service by Bill W.)
District 01

Meets 3rd Wednesday of month at 6:30 PM.
Currently on Zoom – for meeting info go to https:www.district11aa.org/events and look for District Committee Meeting